Message from G.R.A.C.E. Imaginings of an Altered World

How can we shape our near and distant future? Orbiting in space, NASA's GRACE mission satellites (both acronym and poetic metaphor: Gravity Recovery and Climate Experiment) relay data that has transformed our analysis and understanding of Earth's system. These twin satellites are two bodies in constant motion. The shifting distance between these partners is measured by microwave sound, signaling gravitational shifts of water and mass.

Inspired by these new observations and findings, and in an effort to make sense of our off-kilter world, my project, Message from G.R.A.C.E: Imaginings of an Altered World is an intuitive, visual imagining of a transformed world. In this work I offer an inverted reality that is present but not yet seen. The reveal of the color negative upends our understanding of the natural elements. Sky becomes ground, sand a glacier, reflection a galaxy, invasive plant species lacy delights, the brilliant sun a black hole. Delicate details or vast landscapes are familiar yet strange, holding both beauty and decay, alarm and possibilities. 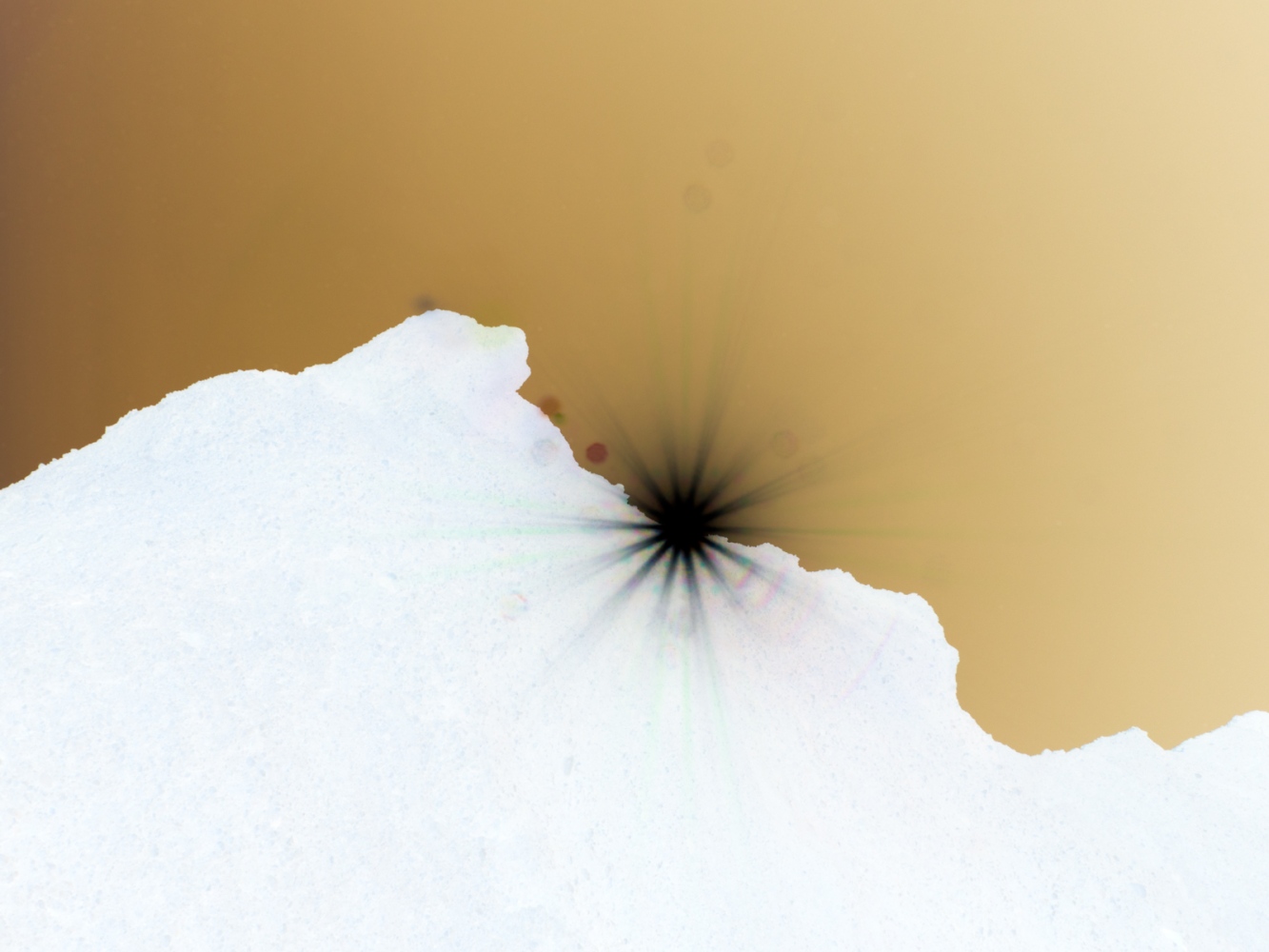 Along an apparent horizon’s rim, the sun turns to black. Doomsday fiction or a temporary phenomenon subject to the physics of time and space? 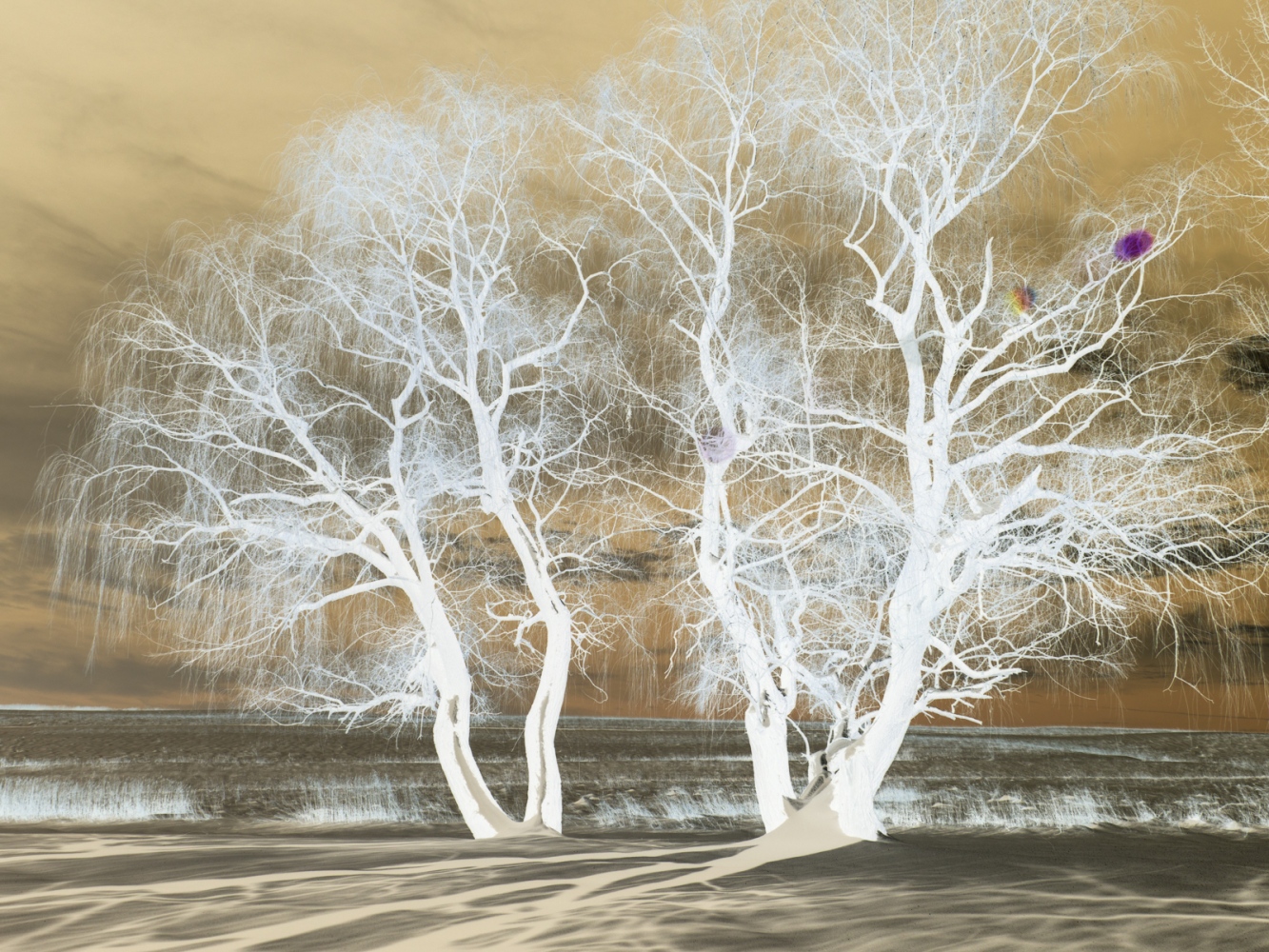 Atmospheric changes alter the tone, smell and texture of our most visited surroundings, leaving a world devoid of familiar places. 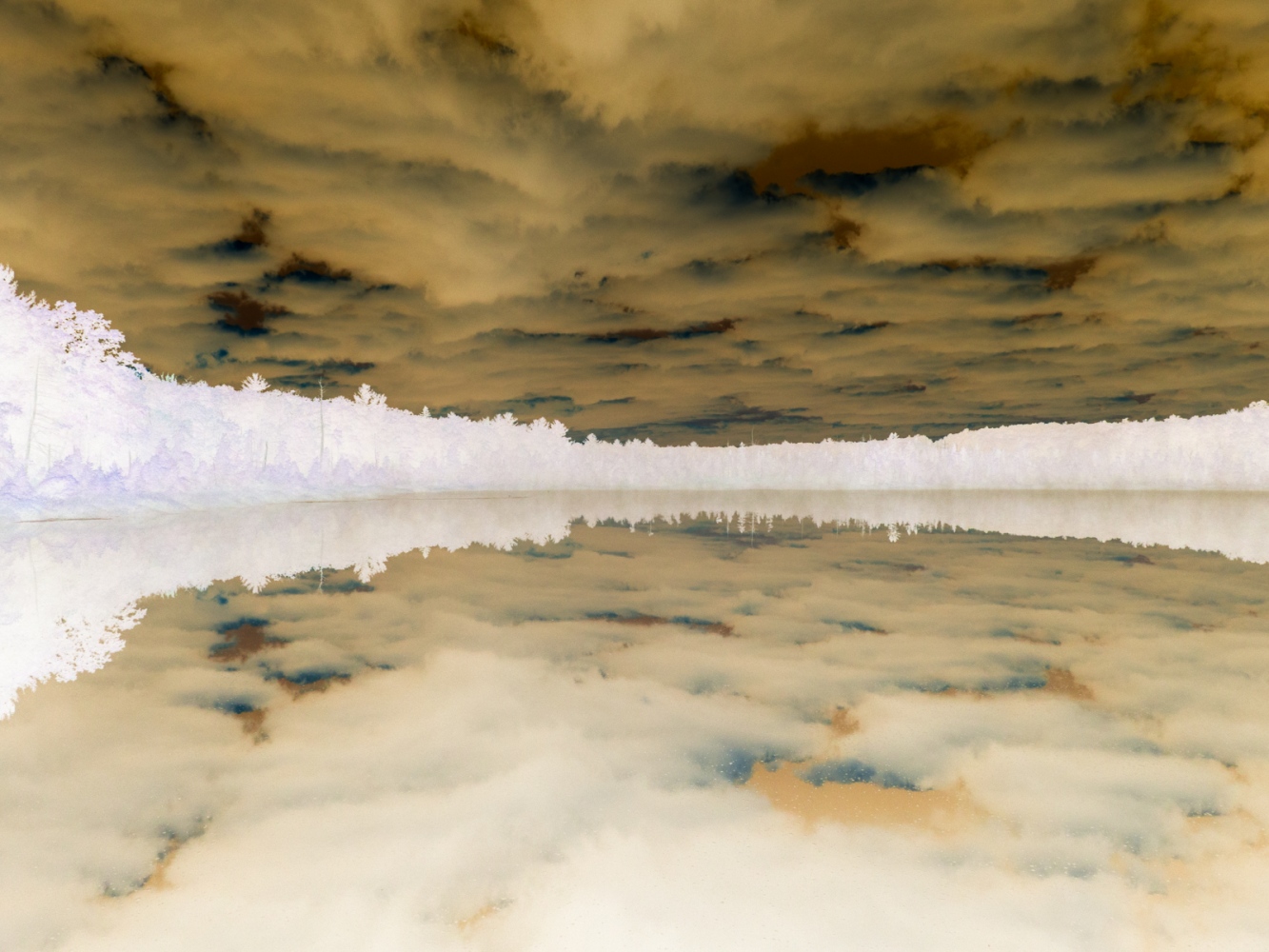 Heavy in the sky, the clouds hang low and the horizon expands. Forecast of an uncertain future when sky and surface converge. 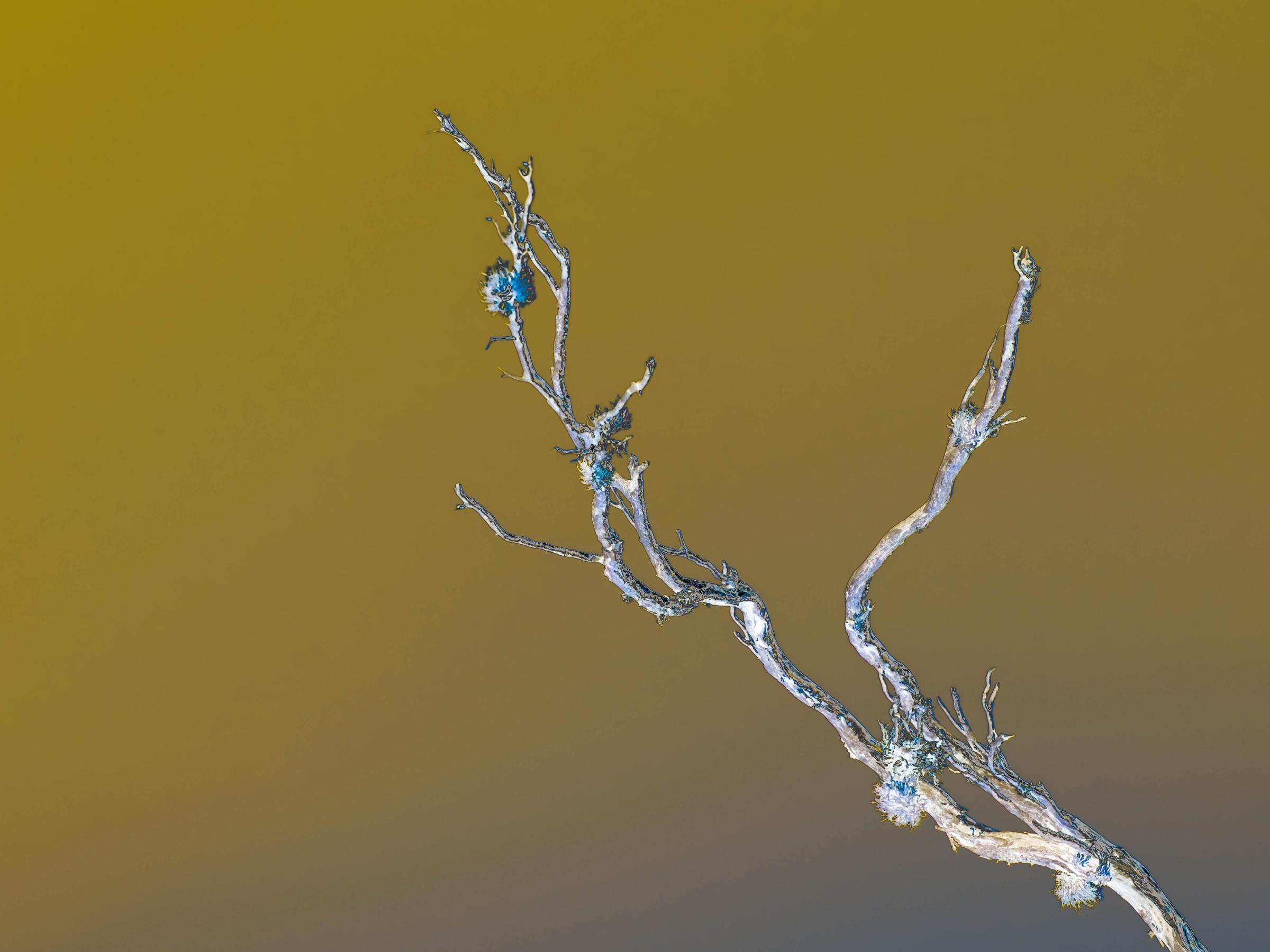 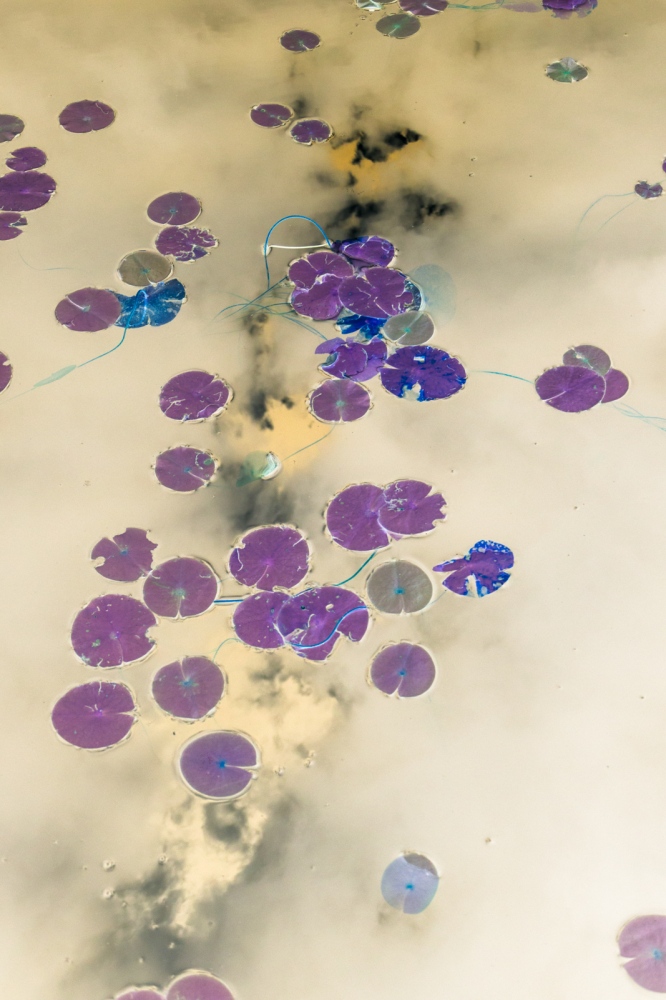 Stillness in the early hours, unexpected shifts of color, lilies float suspended on the mottled surface. Tethered to a murky bottom, plants meet clouds in a tenuous duet. 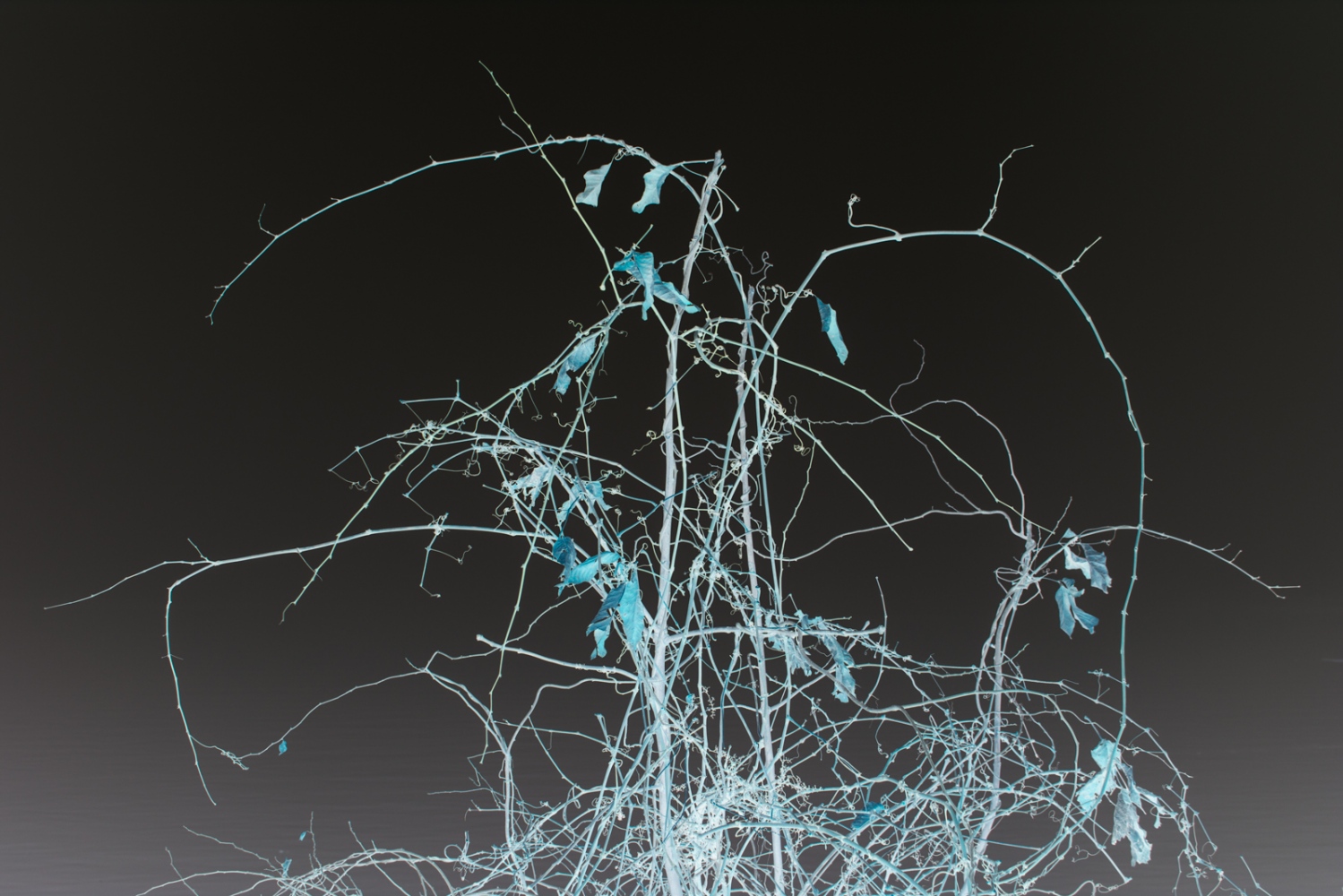 Jewel toned berries tasty to some but the tangled tendrils invade and conquer, blocking light, disfiguring or killing trees with the added weight of snow and ice. 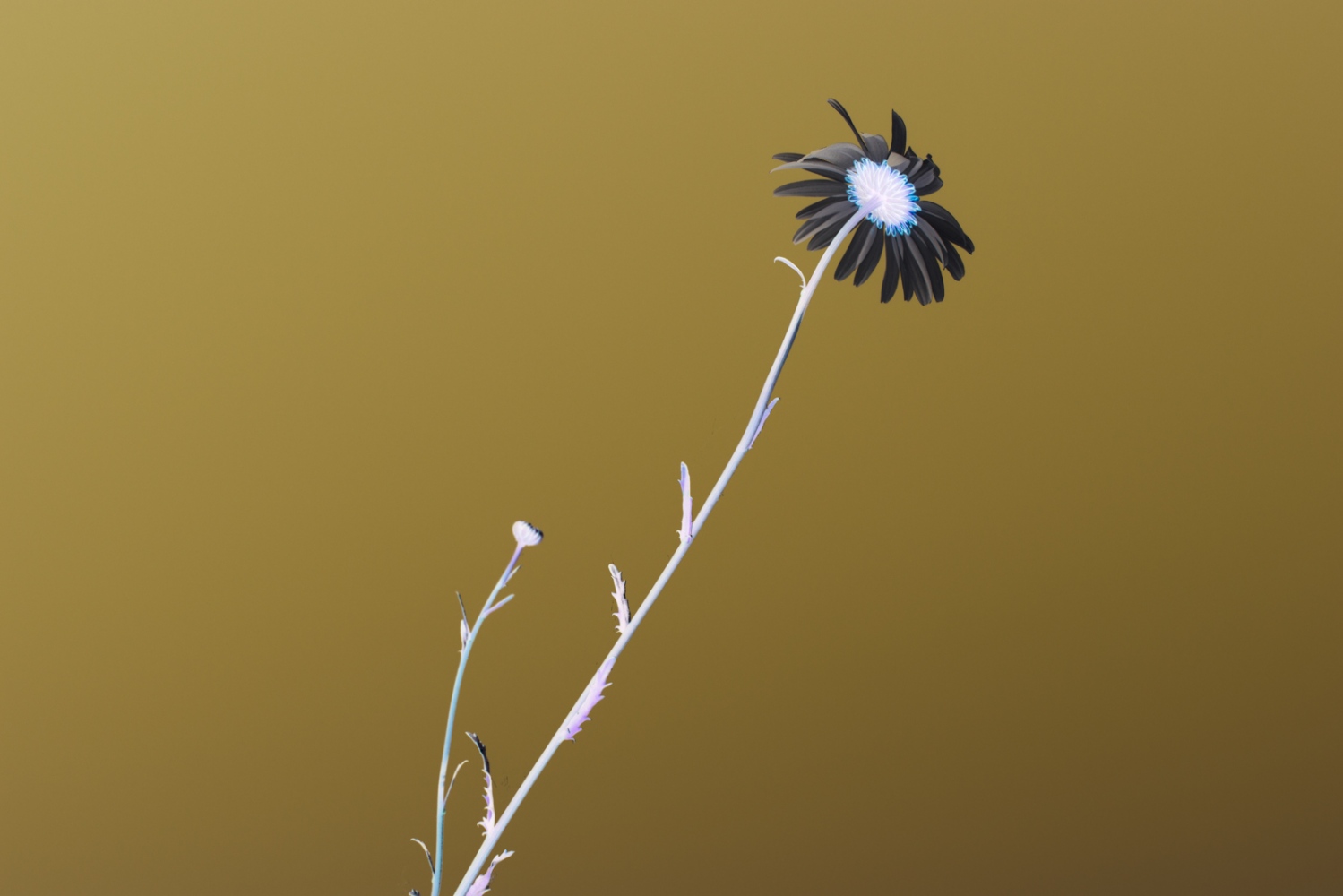 A flower standing on a single stem grows from an ancient cemetery wall. With white petals now black, it turns a watchful eye, waiting for the ritual of pulled petals to ask “he loves me, loves me not”. 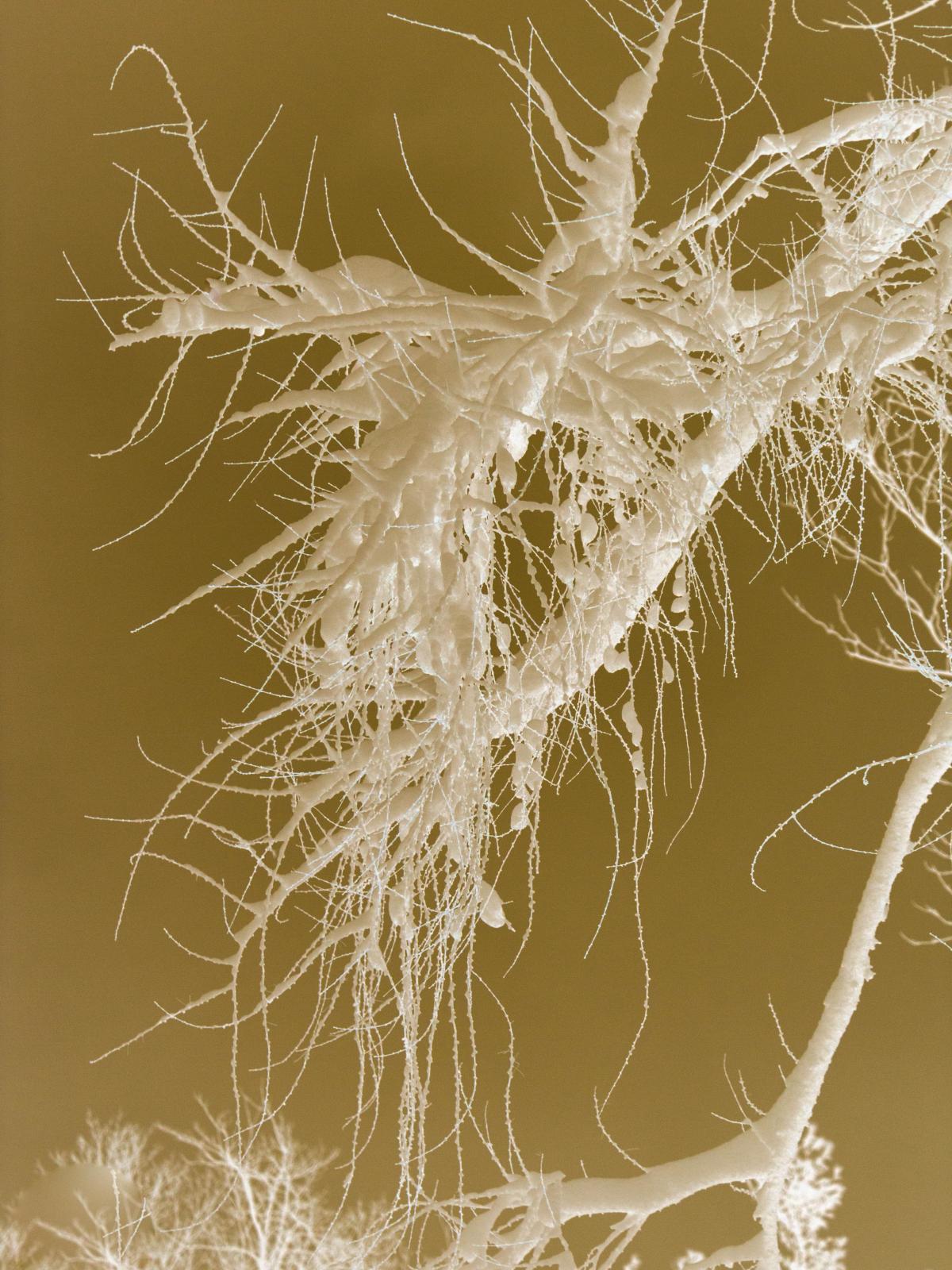 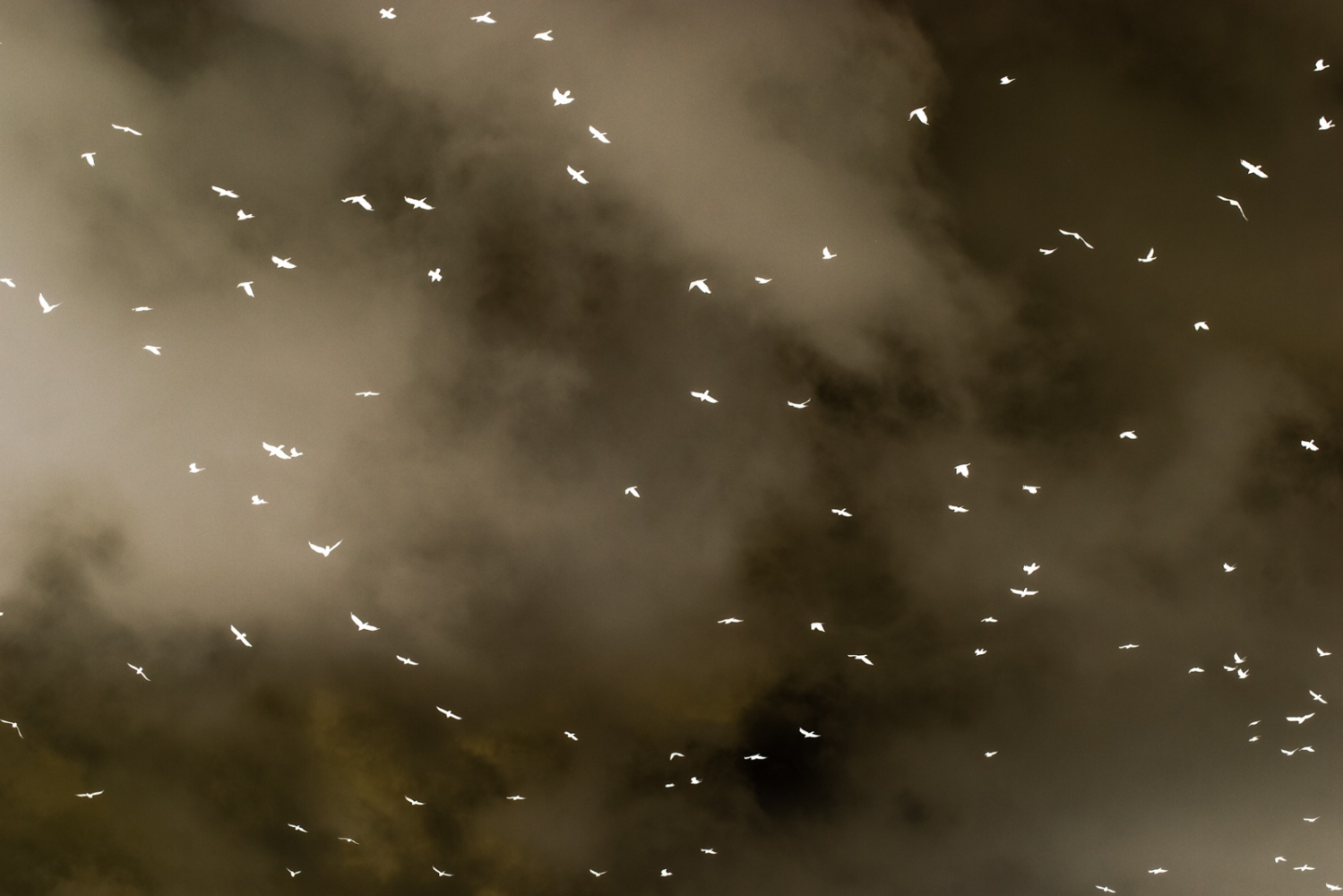 Startled by a change in atmosphere, a flock of birds instinctively take flight, swooping over horses and farmland, searching for safety. 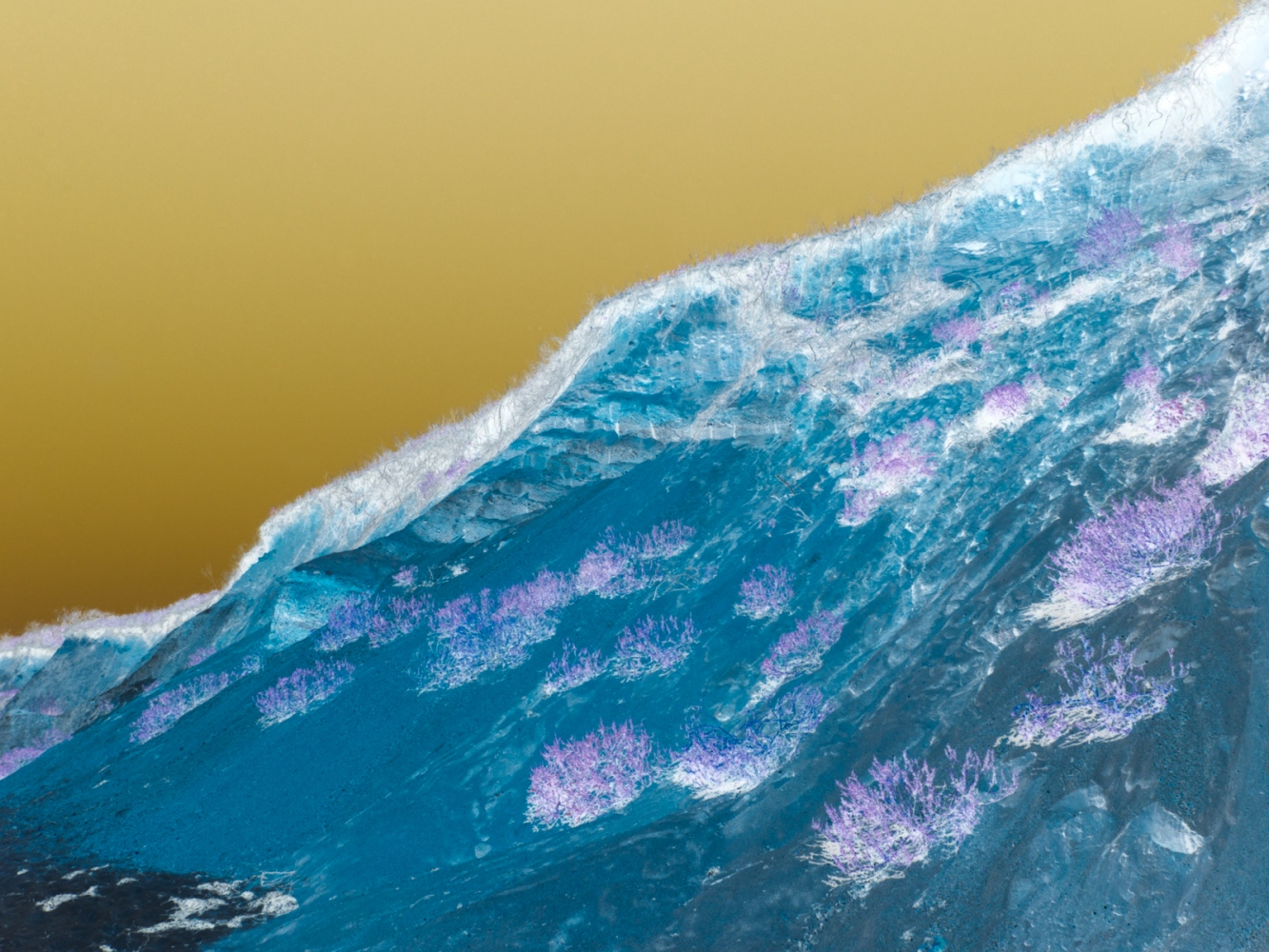 Gravity asserts its power, the heavy blue mass stealthily shifts, carving the ground as it covers all in its wake, leaving terrain altered beyond recognition. 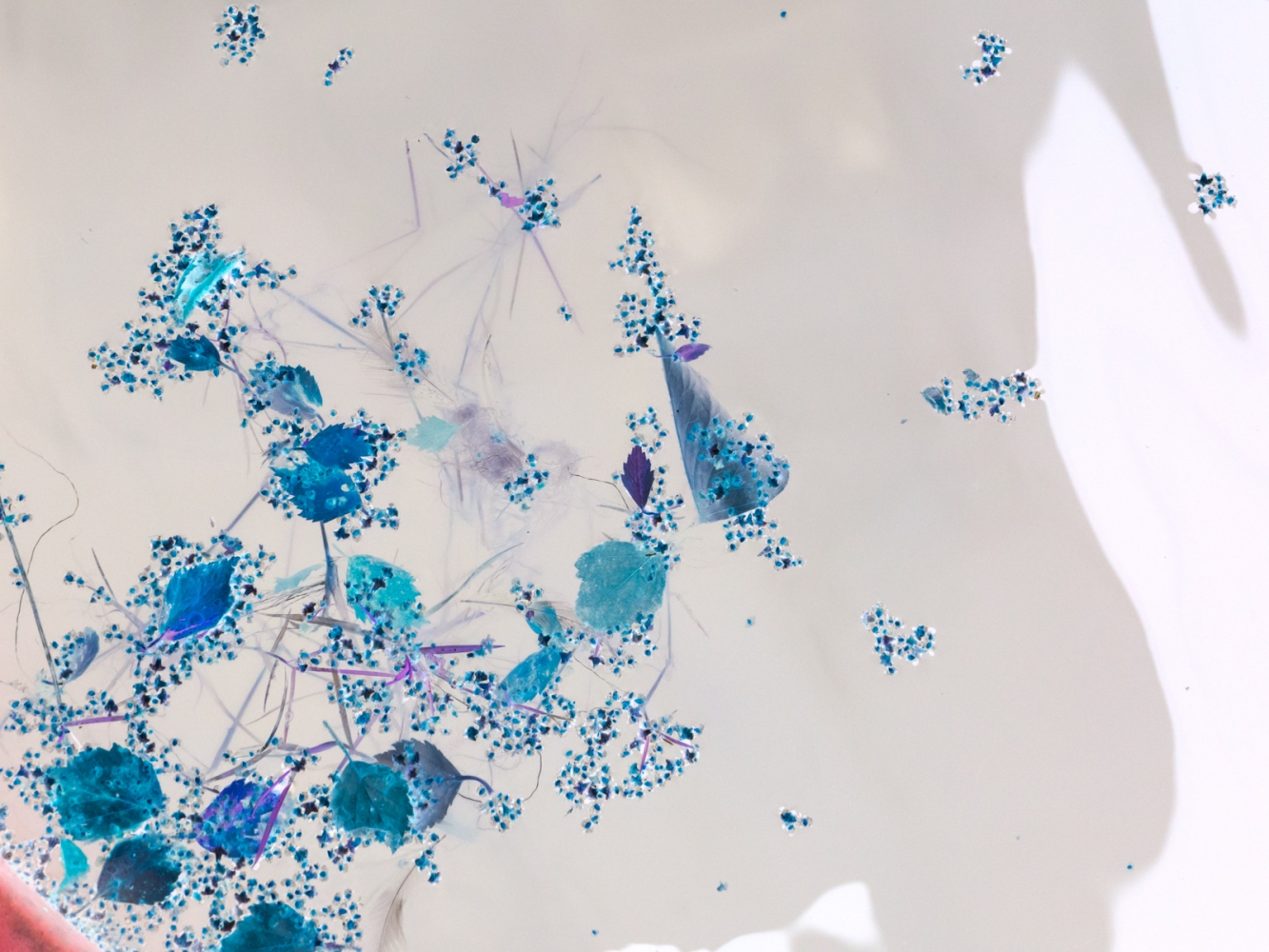 Crops are harvested and shared in newly blended communities, redesigned by changing times. Sustenance from diverse food sources feed our bodies and our souls. 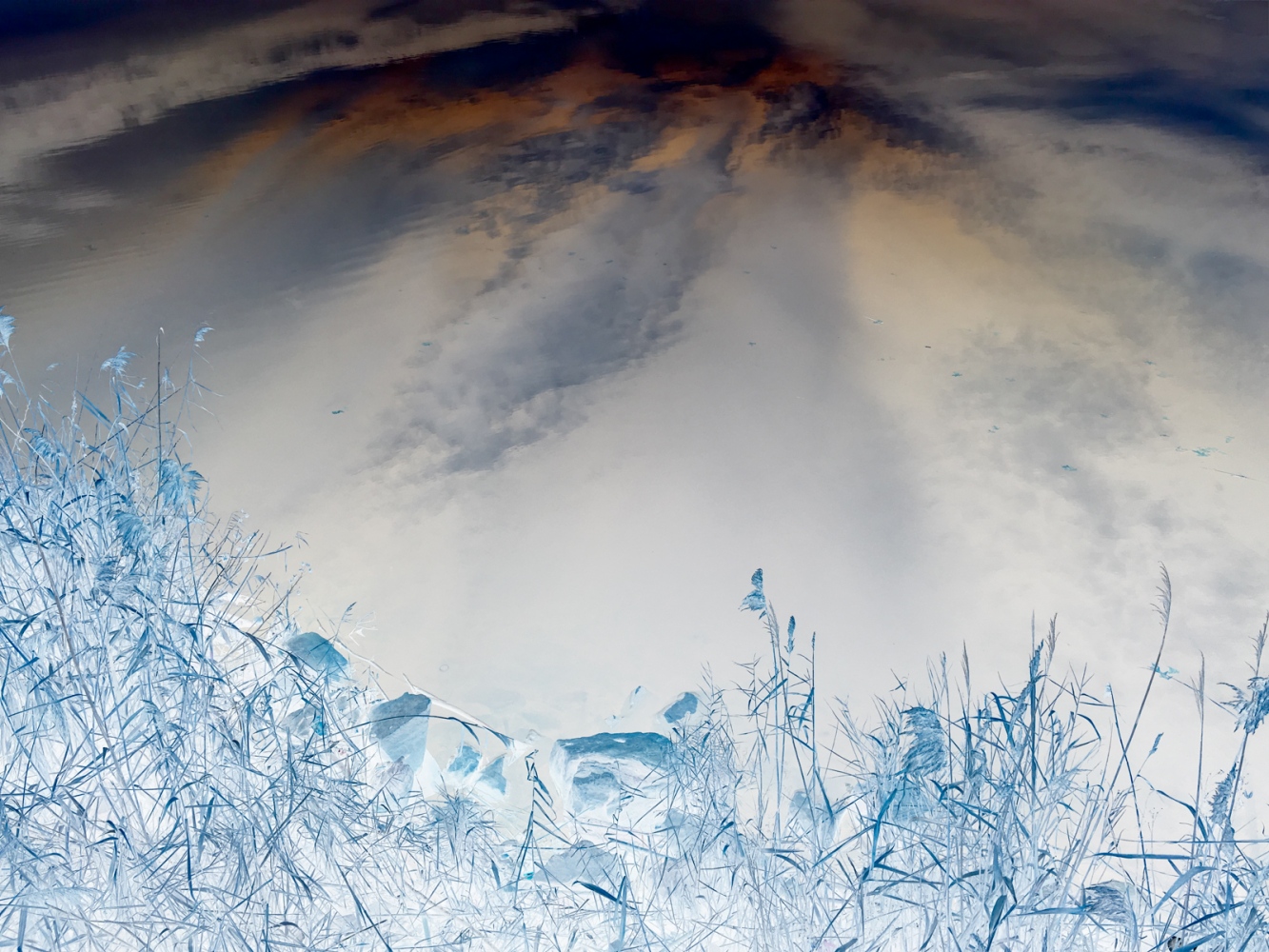 Global perspectives shift, new data informs how we can respond to this ever-changing, unfamiliar world. Reflect on the reality, the possibility of a new future. 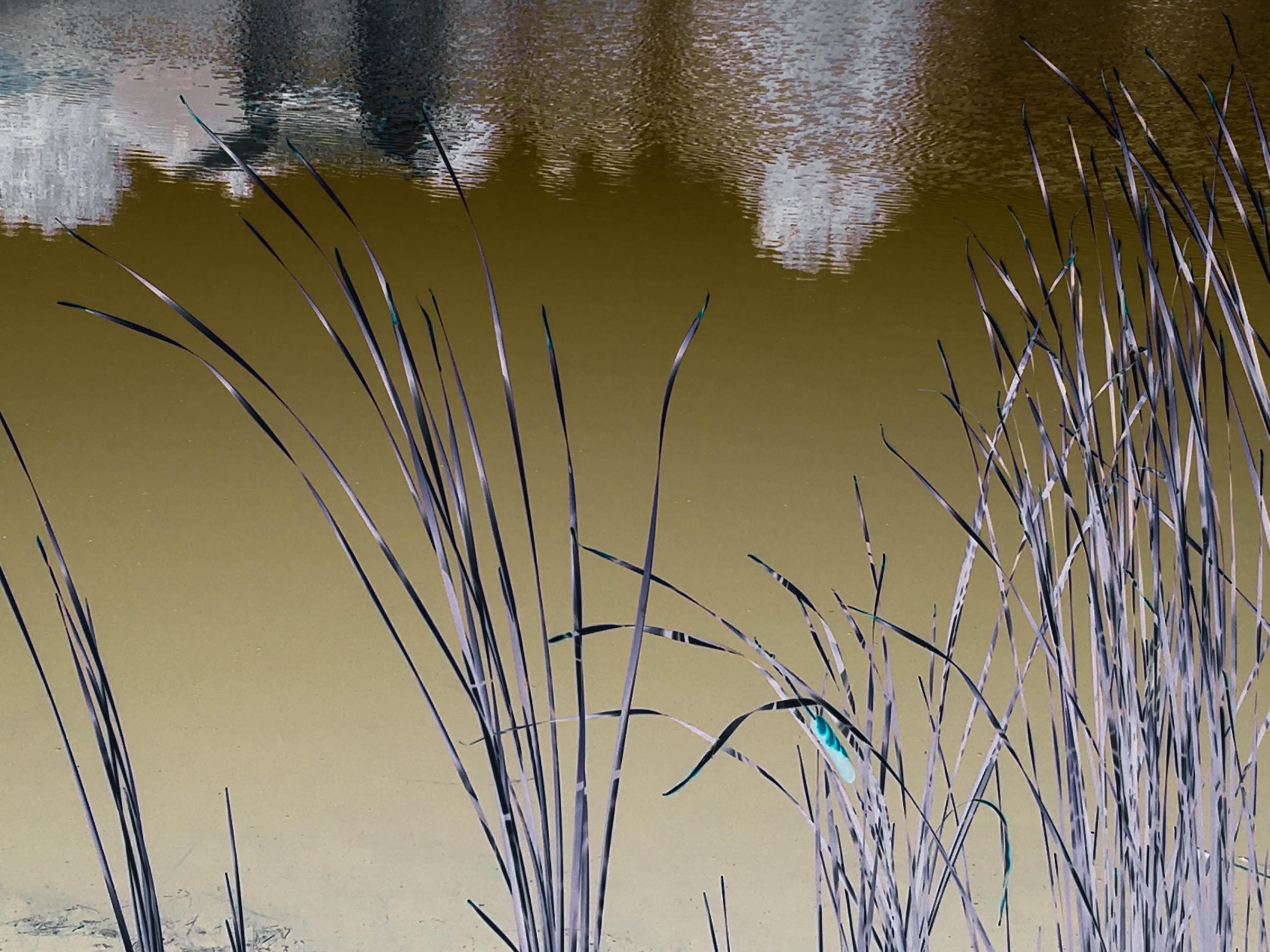 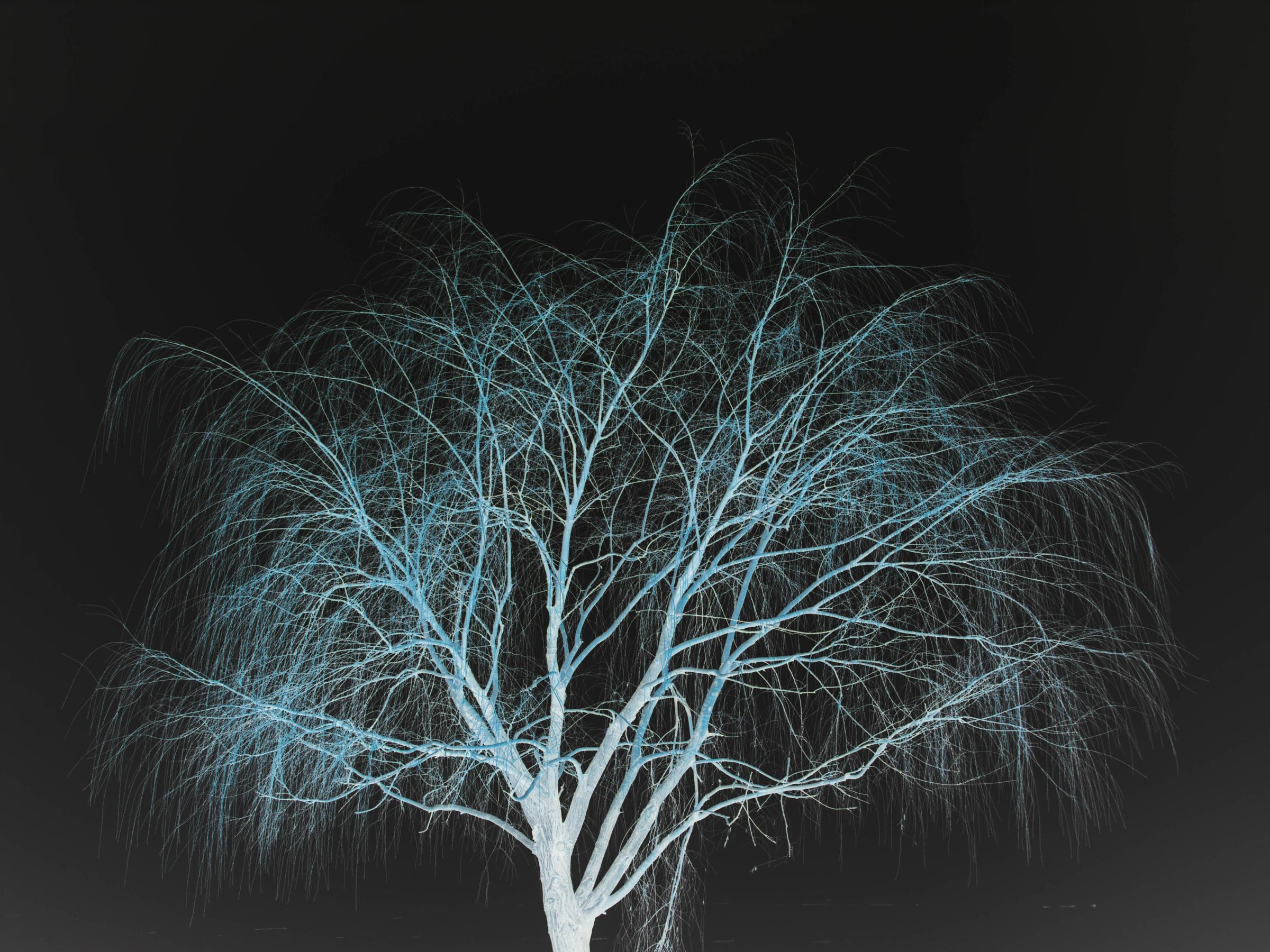 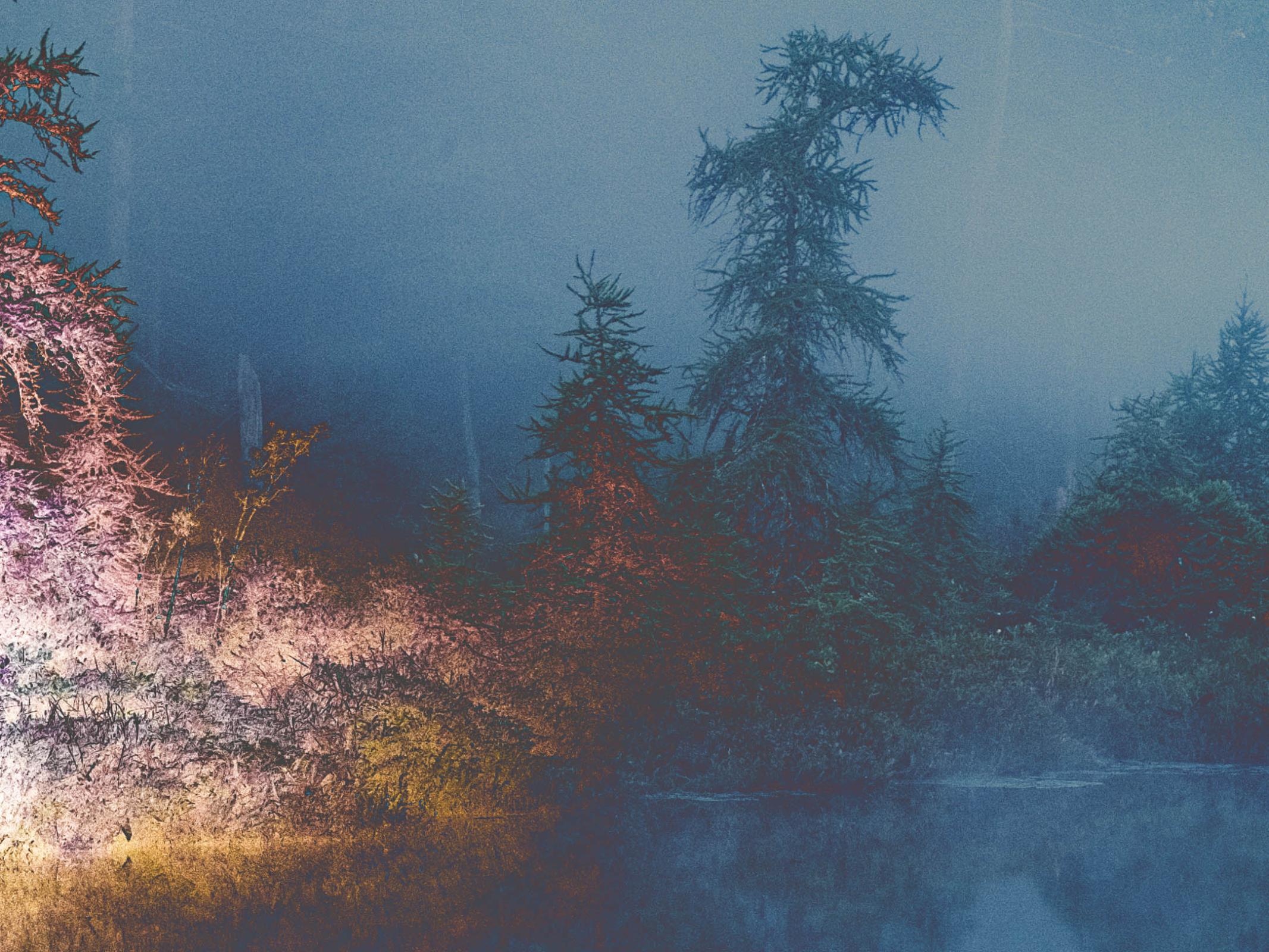 Foreshadowing ignored, even moist, forested areas may be the most likely to face greater threats from wildfires as the Earth grows drier and hotter. 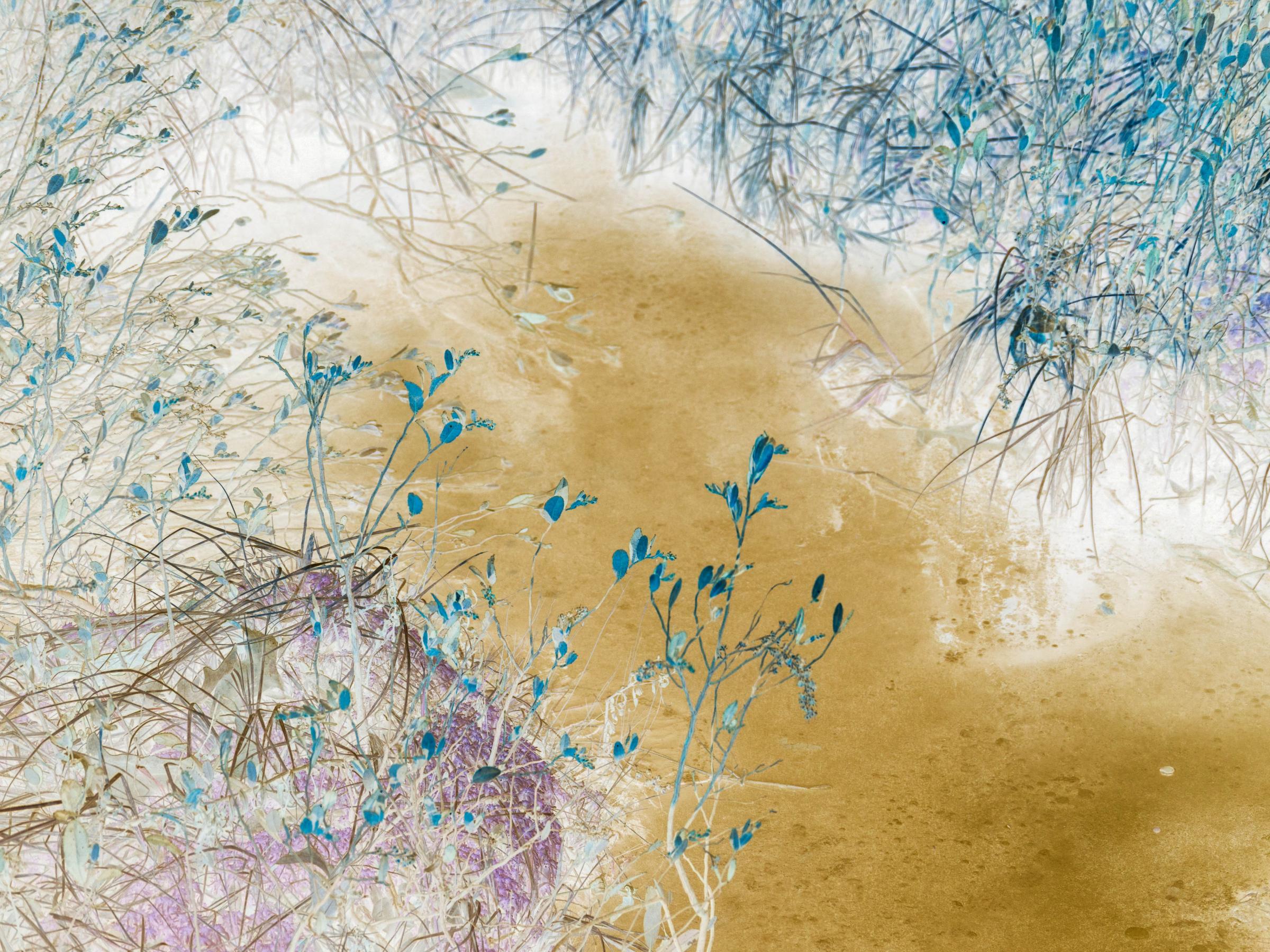 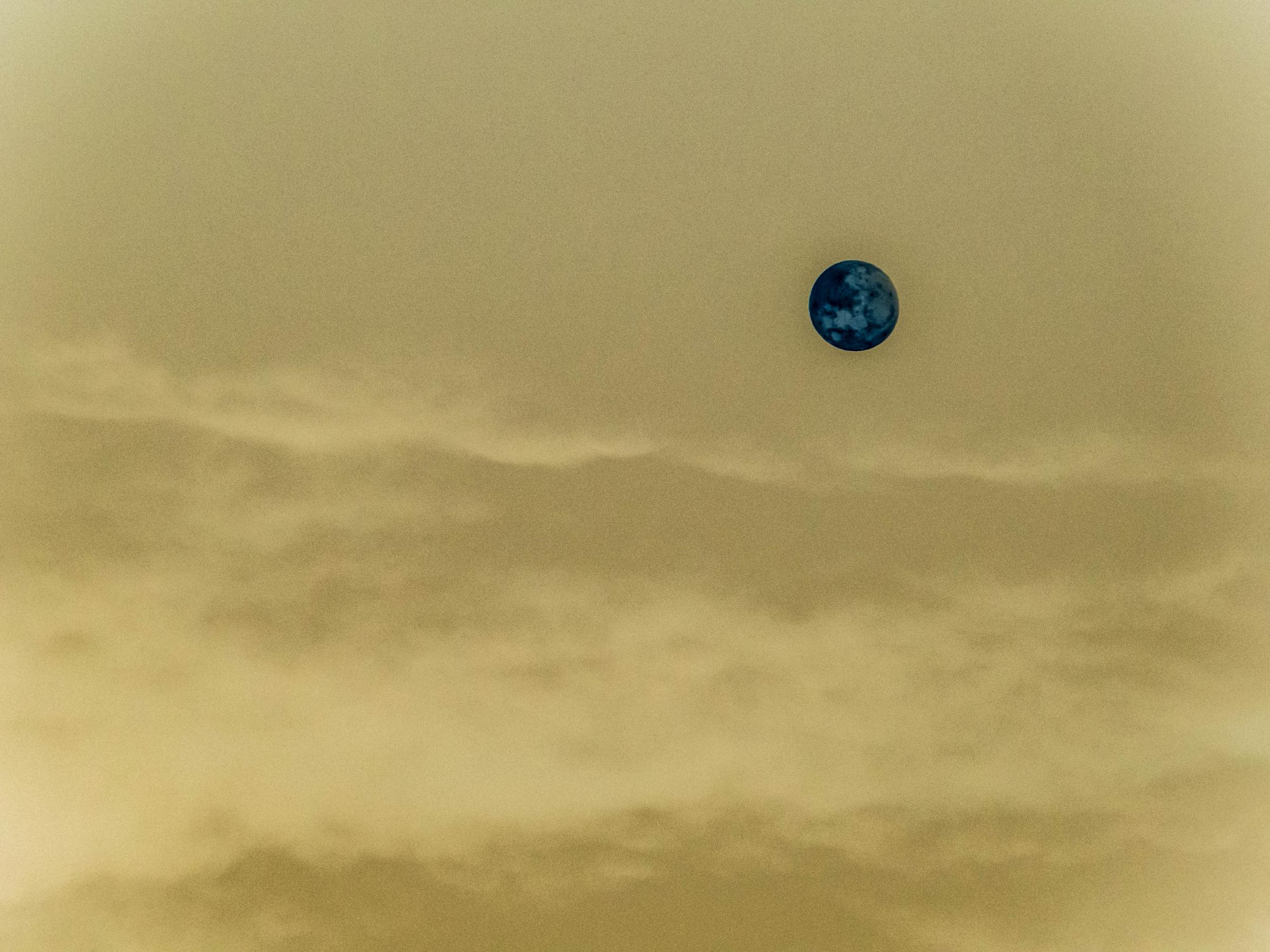 “Once in a blue moon”…a second full moon in a month, lonely hearts, manic episodes, myth or phenomenon. Transparent particles suspended in the atmosphere caused by volcanic eruptions, severe droughts and forest fires blow dust and release smoke in the air, turning sunsets green and the Moon blue. 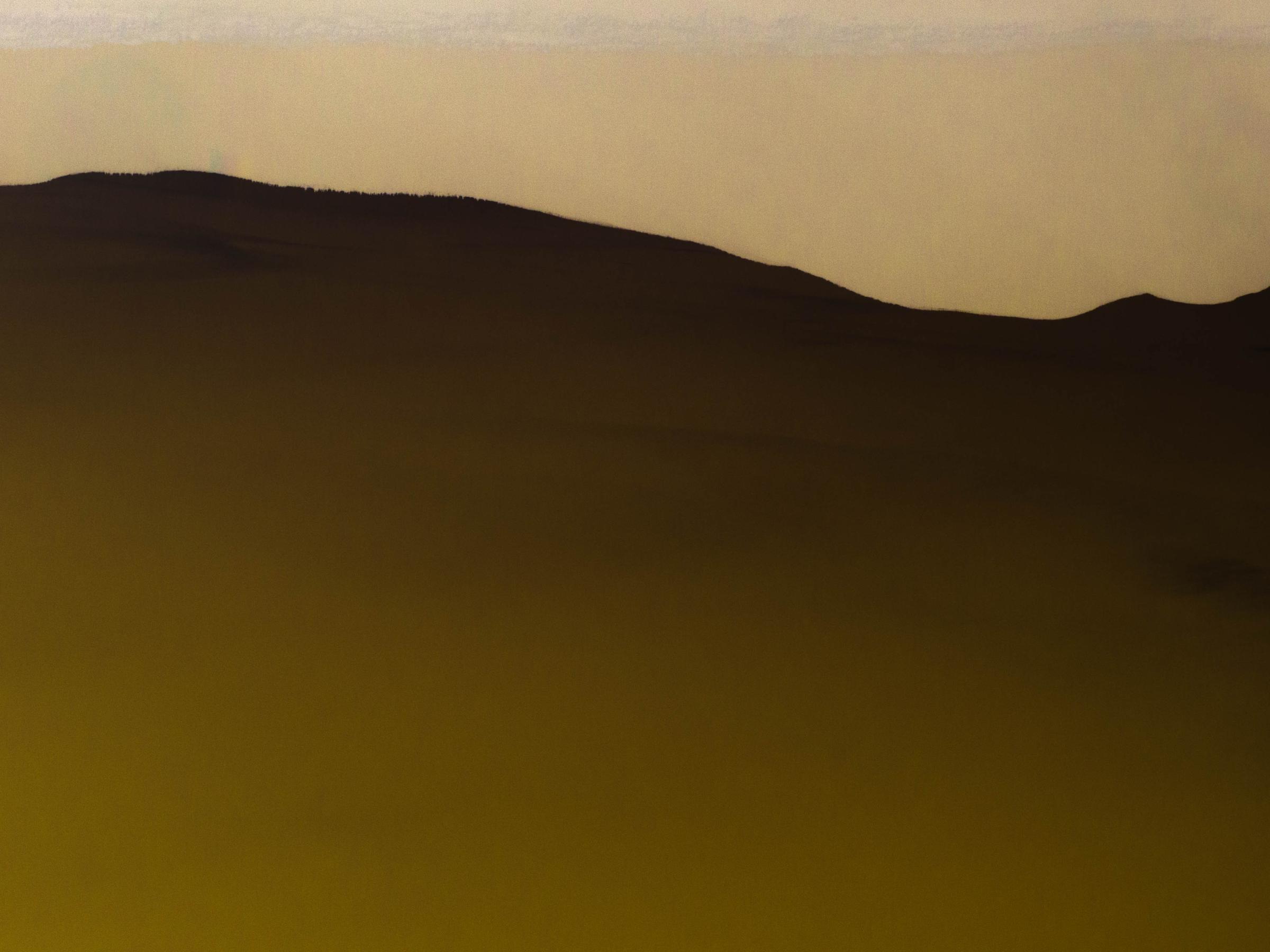 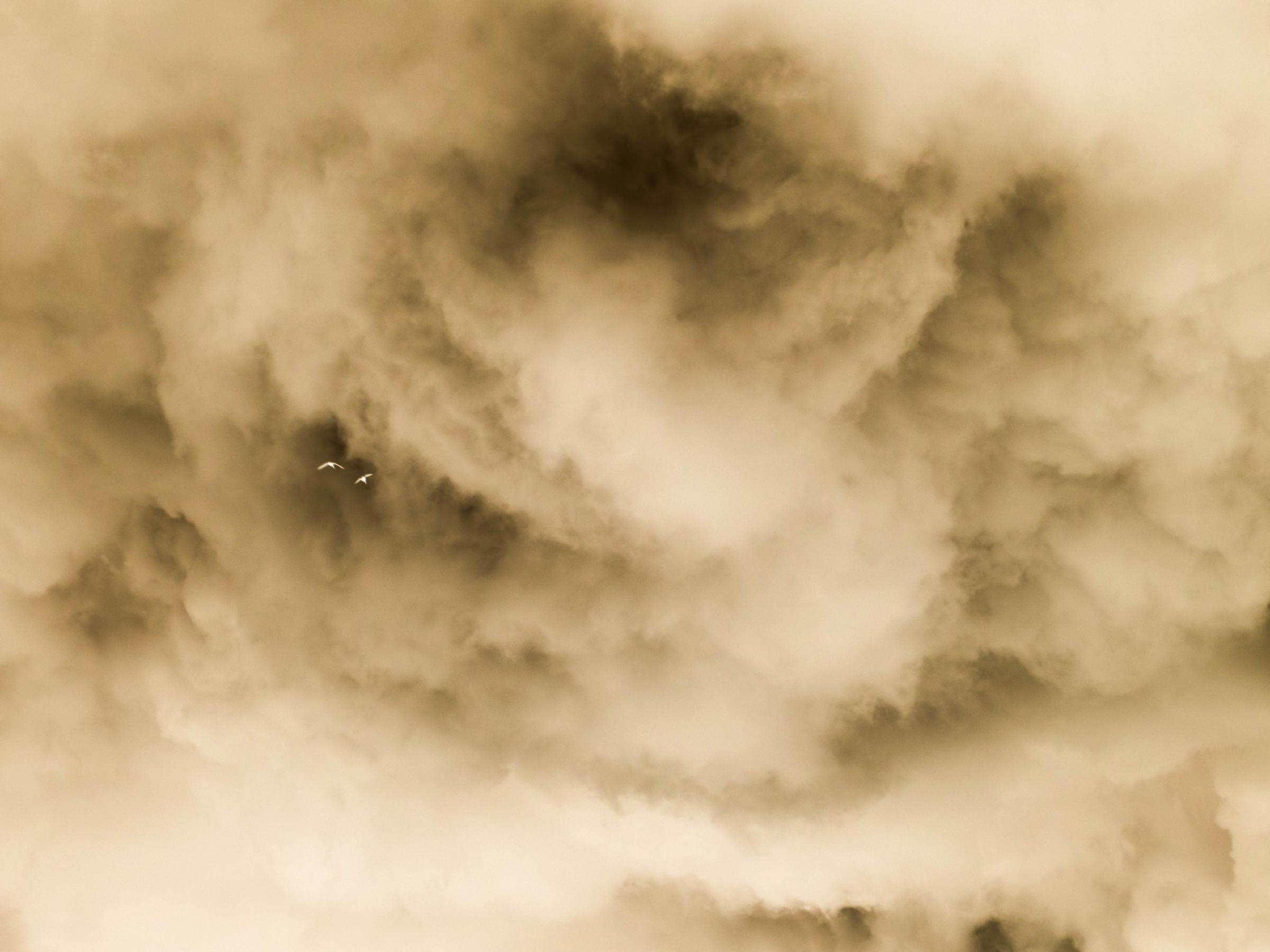 Looking up, drawn to watch as to an emergency. Extreme weather events, appearing as if out of nowhere, increase in frequency and severity, creating a vortex of wind and rain at a magnitude previously unknown. 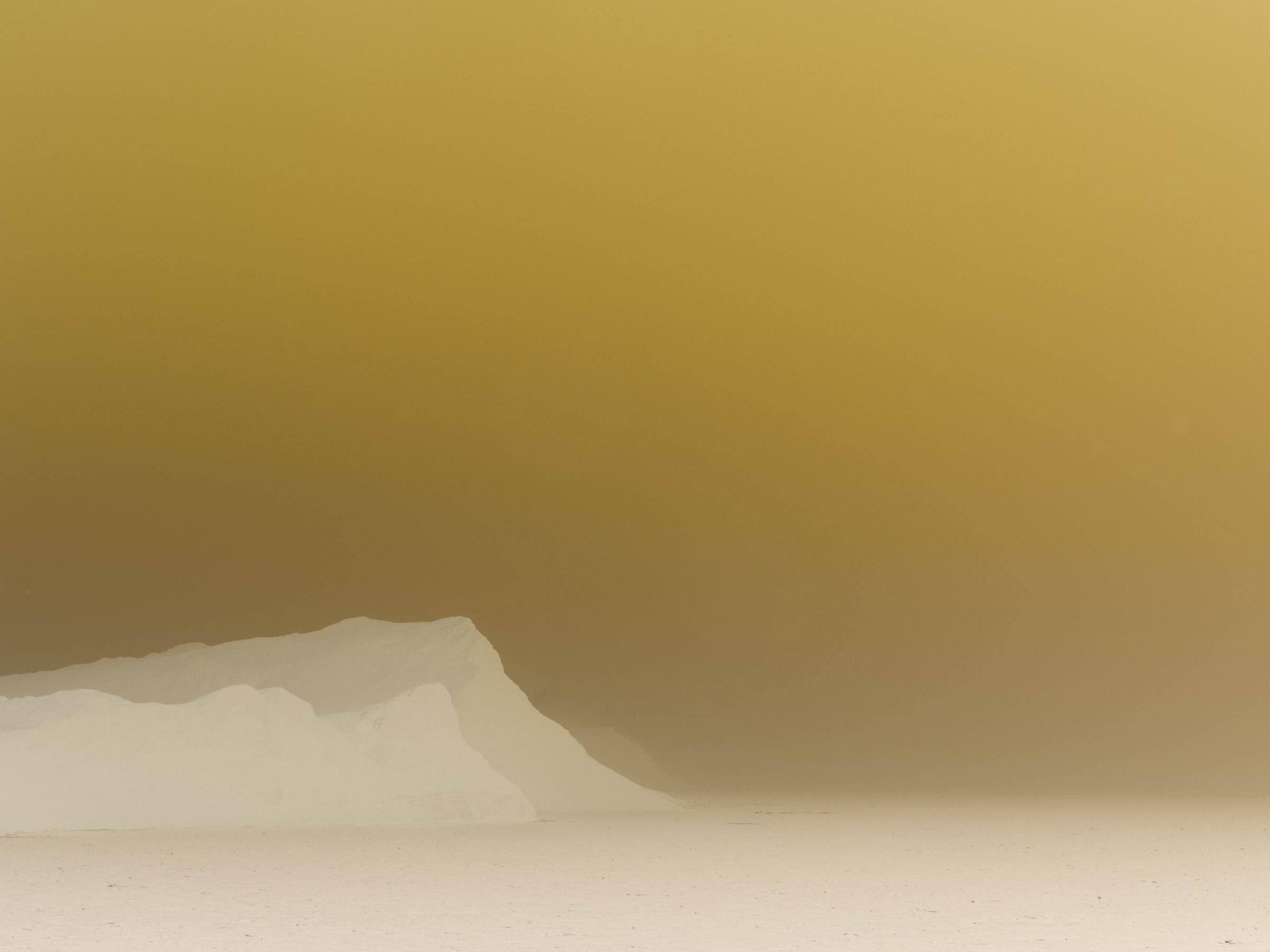 Near the bottom of the world, at the tip of the continent, warm and cool ocean currents converge. Rogue waves and extreme high tides carve away at the rocky coastline, threatening the diversity in the nearby, singular biosphere.

Dawn Watson is an artist and activist. Her work examines the fragility of both the natural environment as well as our relationship to it and to each other.